Get your ink jar ready because we’re about to dip our characters into a time travel scene. You can use existing characters or create new ones for this small exercise. It may lead to a novel, it may not. That’s not the point. The point is to have fun with words.

Your character gets involved in an accident. Moments later he/she finds herself at the exact time the accident is about to happen. What does he/she do differently now? And what are the consequences? 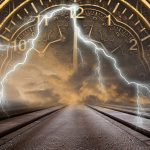 Your character finds out that he/she can jump back and forward in time (max. of 24 hours). Which comes in handy since your character was dumped and fired in the last 24 hours. What happens next?