Monday Moody finally has a job that involves more action as she gets to use her skills as a Traveller to go after dangerous time travellers. It also means she’s working for the most powerful vampire of Sheffield, Oliver Marquis. Though she doesn’t particularly care for vampires, she starts to care more and more about this one. Something that is downright dangerous, especially when their new house guests are equally important vampires with agendas of their own. 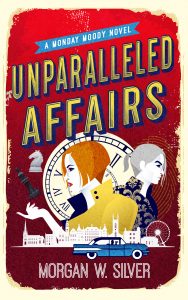 When the future of Travellers becomes more and more threatened, it’s time for Monday to step up. It just so happens that her personal future is at stake as well. With players from the present and the future, it becomes increasingly more difficult to think two steps ahead.